The saga continues with this third contraption of the book I started writing about here. This project is called Lift Operator and it is the first structure in the book using a homemade switch constructed with a paperclip, a small elastic belt and some tinfoil, as shown here:

The placement of this homemade switch in the top of the elevator shaft is shown here: 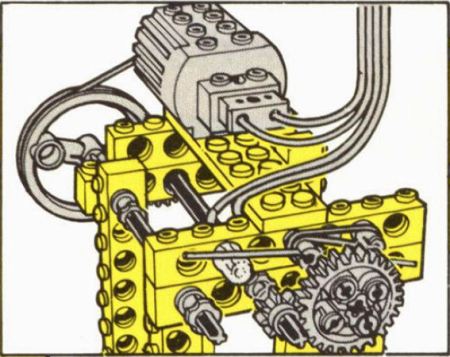 The cogwheel contains four pins causing the paperclip part of the switch to touch the tinfoil wrapped other pin thus making contact. The elastic belt makes sure the contact is broken again in between. These signals are then used by the program to measure how far the elevator car has travelled. In the next video you see the switch opening and closing and the green light on the Vic Rel cartridge flashing accordingly. The program taking care of this all contains only 12 lines of code. They sure knew how to write concise code back in the days 🙂

Finally I took the time to show the moving results of the second project from the book I talked about in this blog post. It is called the Whirly Turtle and needs just one motor to make the most creative drawings.

This is a lap around the contraption:

And this is me steering it manually by using the keyboard:

Finally two attempts of a preprogrammed drawing route, both ending in a dramatic drop off my desk 🙂

As you may have noticed, the motor used in my first model (see Part II) is an Electric Technic Motor 4.5V (#6216) like this one:

I still had the one I got as a Christmas present from my parents back in the late 70s in a beautiful box like this one and I used it a lot in the years to come. 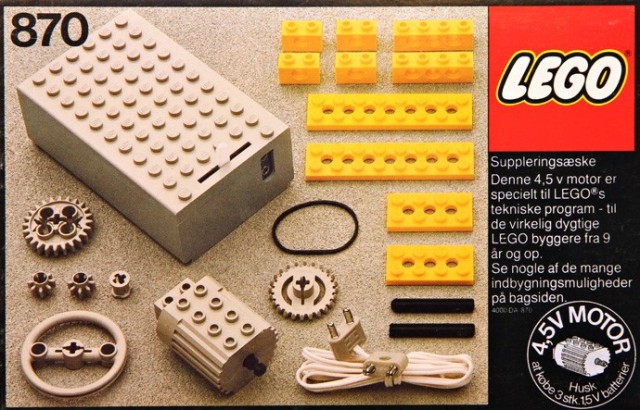 To be able to make some of the models in the book (see Part I) I needed two more of those motors and fortunately I could buy them last week from a LEGO fan that collects and sells mainly sets from the 70s and 80s era. And he gave me 4 electric plugs (#766c01) for free, thanks Marcel! 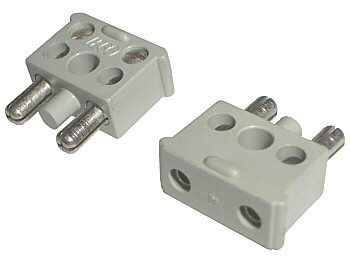 I need to break off that little plastic pin in the middle in order to make the plugs fit into my own motor and battery box that do not have a hole to accommodate for that pin.

Ok, in the meantime I have received the Vic Rel cartridge (see Part I). 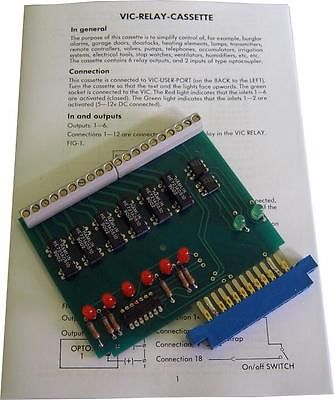 Then I bought a working Commodore 64C (the newer model of the C64, which was released in 1986 and looked a little bit like the Commodore 128). Back in the 80s I owned the original C64 (the so-called breadbox model), so now I wanted the new model for a change 🙂 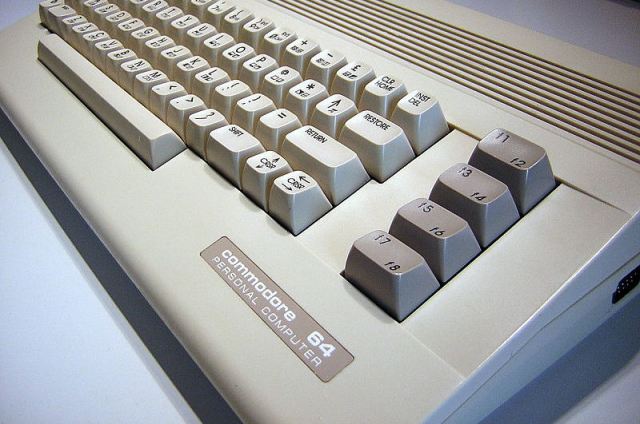 My Commodore 64 is the same model, but does not look as nice as the one in this picture. 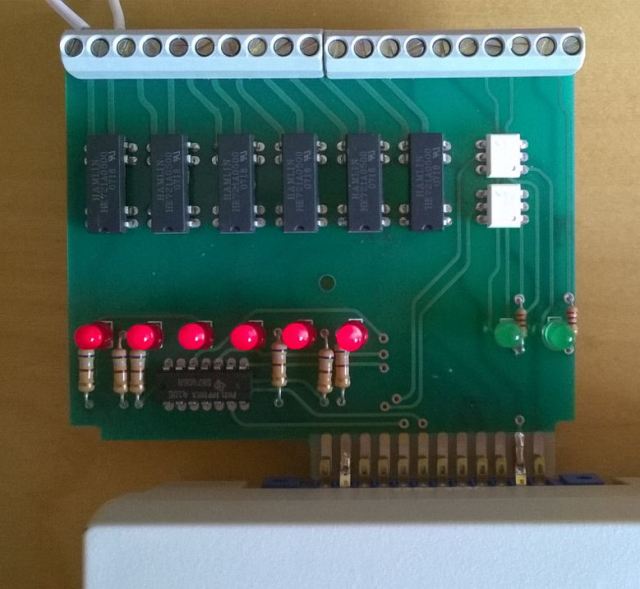 The Vic Rel cartridge placed in the user port of my Commodore 64.
By default all red lights are turned on when the computer is turned on.

I already built the first LEGO Technic model from the book Make And Program Your Own Robots For the Commodore 64 and Vic 20 (see also Part I) that made me start this little project in the first place… but I could not really test it until I received my Commodore 64. I typed in the Basic code also provided by this splendid book, looking like this:

And then the following happened:


So it all worked great..! This first robot model from the book is called Walking Android. If you watch really good you can see the leftmost light on the Vic Rel cartridge turning red as soon as the contraption starts walking after the first keypress. The light is turned off as soon as a key is pressed again causing the robot to stop walking.

Being a teenager back in the 80s my home computer of choice was the Commodore 64. It stayed in my old room at my parents house long after I moved to my own place. I sold it over a decade ago when I got my parents to learn how to use a PC with an Internet connection and they needed a place to put these new devices. I saw no further use for it because I could emulate the C64 for free on my PC using e.g. CCS64, Hoxs64 or the Commodore 64 Emulator (written in WPF and Silverlight that also ran on a Windows Phone 7). I even bought a Competition Pro USB joystick to get that same micro switch game feeling of the mid 80s while playing those emulated games on a modern PC…

Recently I stumbled upon a forum post entitled Make And Program Your Own Robots (1985 Lego!). The book mentioned there is basically about creating LEGO Technic models and operating them using LEGO 4.5 volt motors controlled by a CBM 64. This is made possible using a relay controller called the VIC REL, created in 1983 by Handic Software AB. This hardware interface needs to be put physically into the so-called user port of your Commodore 64. So now I am regretting ever selling this beautiful device 😦 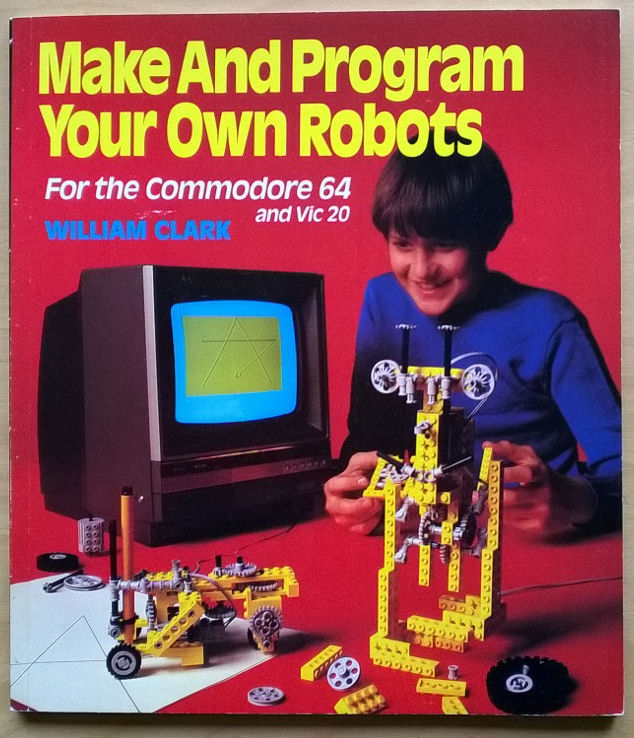 At first just for giggles I started looking for such a Vic Rel relay cartridge… but you guessed it… I finally ordered this one via eBay, sold by a user called freeweb. So now I am waiting for its arrival. To be continued…

For my nephew’s birthday I ordered some World War II soldiers from BrickArms via BRiCKiZiMO, their reseller in the Netherlands. They create very nice helmets, uniforms and weapons… Ok, I ordered some for myself as well. To fill up my red minifig wall 🙂 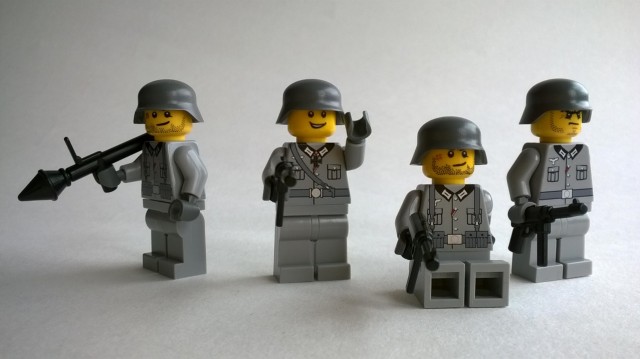 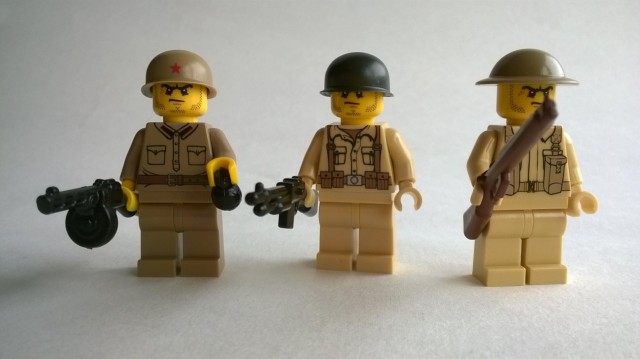 Some time ago I used three #799 Gray Giant Base Plates (50×50) to build my minifig wall. That was in the Summer of 2013. This Christmas holiday I replaced those plates and used four #4186 Red Base Plates (48×48) positioned horizontally just below the ceiling. This gives me the possibility to add more minifigs (now 241) and enables the wall to grow by attaching one or more red plates to the lower right side. 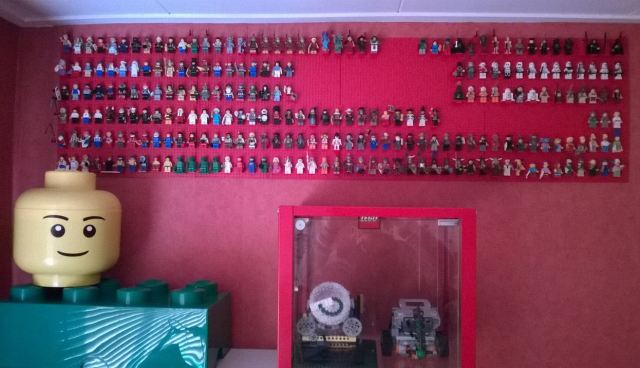 I must have dropped this piece

and our lovely dog called Linux decided to play with LEGO, too… 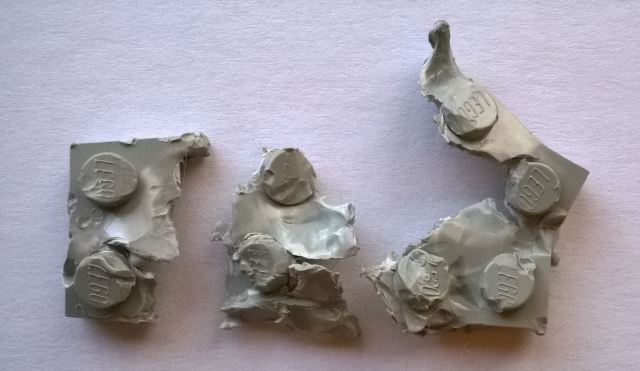 And here is Mr. Innocent himself: 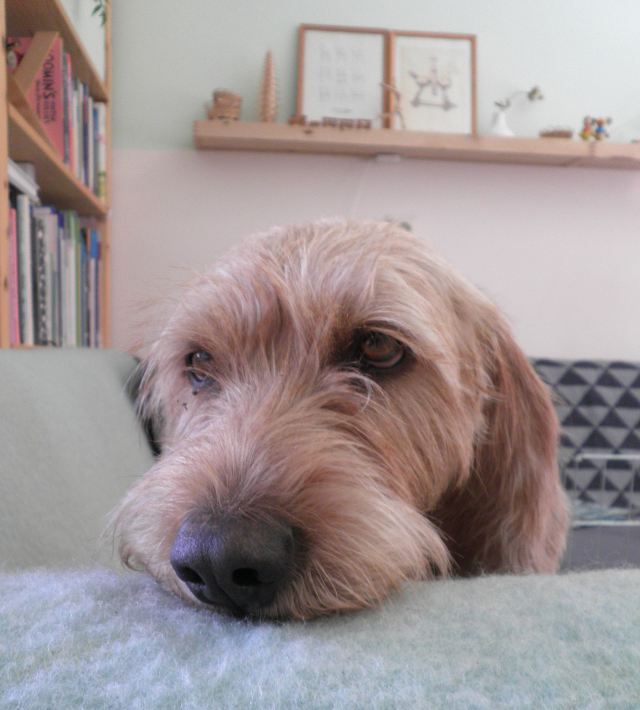 Maybe you remember this post (from over a year ago) in which I showed a very primitive version of a little magnet car which at that time I got into action by moving my hand holding a magnet under the road plates.

are being used and some Technic Chain Tread Wheels (#57520)

and of course the magnetic magic is still performed by these parts: Magnet Cylindricals (#73092)

Unfortunately it is a very unreliable construction. I was glad to get it on video in one take, because a lot of times the vehicle just stops while the underlying magnet set moves on. The heavier the vehicle gets of course, the harder it is to get this contraption to work. I am afraid I need a whole new idea for some next LEGO WORLD GBC 😦

Yes, I bought a whole retail box containing 60 minifigs from series 13 on eBay. That is a lot of bags filled with 16 different characters from the Simpsons television series. 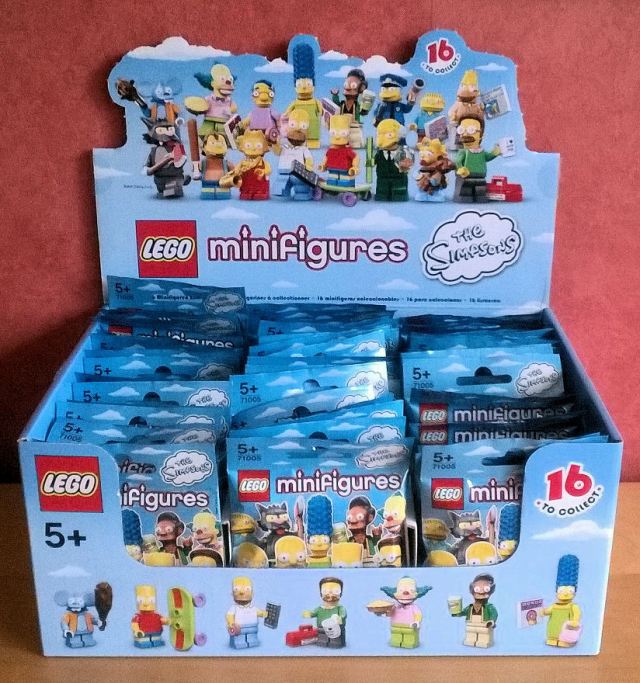 It took me a while to get the fabric skirts for Marge and Lisa in shape. But here they all are. I now have at least 3 units of each character.