Last weekend (September 9 and 10, 2017) for the first time in my hometown Apeldoorn “Het Festijn met Bouwsteentjes”, loosely translated “The Party with Building Blocks” was organized at the Americahal. As a member of De Bouwsteen, a LEGO user group in the Netherlands, I volunteered during construction day to position tables and wooden plates inside the exhibition hall and to fix/finish some LEGO models that were broken during transport.

A nice side effect of helping out in your municipality is meeting other LEGO fans that might be living in your own neighbourhood or even street without them knowing you or each other. During the actual event I visited several times as a guest, showing big and small friends around the many LEGO displays and shops.

One of the showpieces was Paleis Soestdijk, a former palace of the Dutch Royal Family. It was commissioned by LEGO and built by members of De Bouwsteen in 7 months, taking 900 hours using 60,000 bricks! Here is a picture of the finished model, which consists of three parts that needed to be transported by lorry.

Another magnificent model that was on live display for the first time was Anatomini. This anatomically correct skeleton that fits inside an upscaled hollow minifigure has been created by Stephan Niks. He was one of the other volunteers I met during the event. He is an engineer and visualisation artist of (air)ports by profession with a keen interest in science and engineering. He told me he designed this model using LEGO Digital Designer. Please vote for this stunning model on LEGO IDEAS in order to increase the chances of having Anatomini turned into a genuine LEGO set. Also check out its beloning updates page for more pictures and a VR video..!

Here are two pictures I took of the display of Anatomini. One on Friday without the actual LEGO model, the second one with this great model live on stage..! 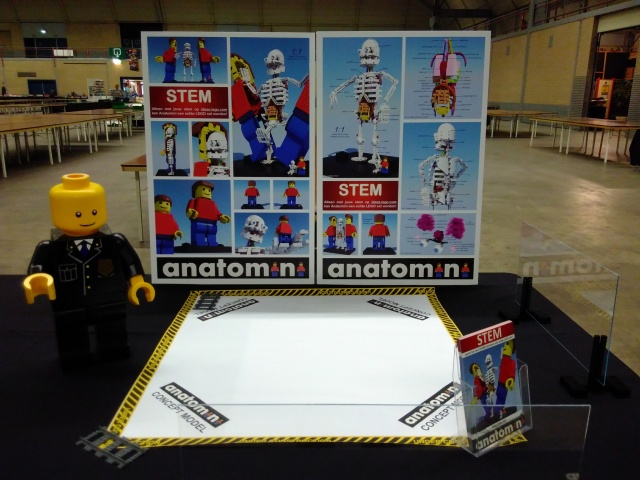 For my Second World War interested nephew I bought this German soldier with parachute and other gear from the BRiCKiZiMO Toys stand.

A scan of a local newspaper article (in Dutch) about this event can be found here.