Last Wednesday night I went to the venue where LEGO WORLD would be held in Utrecht, The Netherlands. During that day people have the opportunity to build or set up their store, buildings, booths, etc.

My mission was to bring my small contribution to the GBC to the spot where it would fit between the other modules, and I succeeded. I also took some time to wander around the not-yet-but-almost finished halls filled with LEGO (and related) stuff, without having to deal with the crowd that would enter the next seven public days 🙂

This year I am an Adult Fan Of LEGO (AFOL) volunteer via De Bouwsteen for the 2nd time. Now on Friday and Saturday only, so my module was on its own the first day of the happening. But when I entered today (Friday), I saw it was taken out of the assembly line on the first day 😦 because the module appeared to have some bug causing it to crash. I spent time testing it outside of the chain to see what went wrong and I finally fixed it (for the time being anyway) with one single strategically placed 1 x 2 plate:

Fortunately after that fix the Crystal Tube could take part in the GBC again right after lunch and stayed productive without any disturbance until closing time at 5 pm. I was so proud that it finally worked that my colleague Bas, who visited with his son Berend, insisted to take this picture: 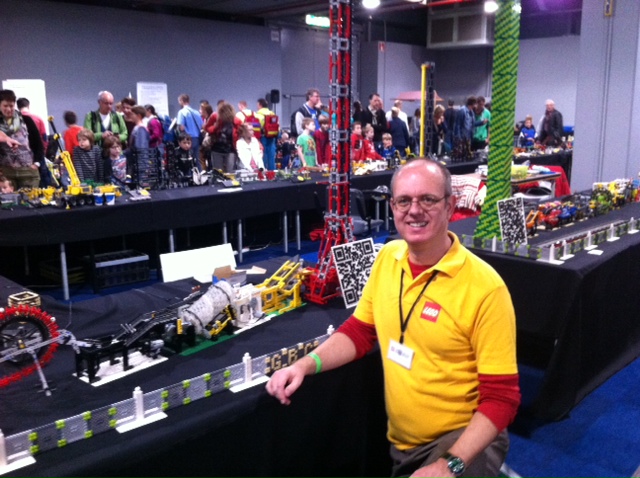 Here is a video of my contribution holding well between the other modules:


Oh, and I picked up my LEGO MINDSTORMS EV3 (#31313) box I preordered via De Bouwsteen. But that is for another time…